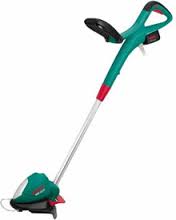 All operators press a button when they have completed their particular assembly tasks, and when all tasks have been completed the system indexes each pallet to the next station. One of the automatic assembly stations is used to press a drive dog on to the trimmer motor shaft; the second such station is reserved for possible future expansion.

At the first automatic test station the pallet is lifted up by pneumatic cylinders to make contact with overhead connectors, allowing a number of electrical and mechanical tests to be performed. First the trimmer is flash-tested to check for electrical safety, and then power is applied to the trimmer to run the motor. Certain models incorporate a semi-automatic line feed mechanism that is operated by tapping the spool on the ground while the trimmer is running. To test this a small pneumatic cylinder taps the bottom of the spool to feed out more line, and the increase in motor current signifies that more line has emerged from the spool. The line is cut to length by an automatic cutter blade.

At the second test station the trimmer undergoes another period of running during which the motor current is logged and the trigger switch is tested. A bare motor is also housed on the pallet, and is subjected to a flash test at this station. This motor will be used next time around in the trimmer that is being assembled, and a new untested motor will be placed on the pallet. Test results including mains voltage, running current, start current and flash test voltage are logged and reported back to the company’s main QA computer over an Ethernet link.

At the unload station the equipment prints a product identification and serial number label, which the operator sticks onto the finished product. Any faults detected in the trimmer or the motor at either of the test stations are reported on a simple text display panel. Once the product has been removed from the pallet the system is free to index all the pallets to their next stations. Empty pallets are shuttled to the rear of the production line where they are returned to the beginning by an endless belt conveyor.