Cambridge Dynamics have worked closely with Moog Controls limited for many years, Moog were the first company to produce a programmable digital servo controller (PSC) and we have successfully used this controller in a wide variety of applications from machine tools to high security access gates for the UK Atomic Weapons Establishment. This case study describes the application of a Moog PSC to the control of an experimental wind tunnel in Queen Mary & Westfield College at the University of London. 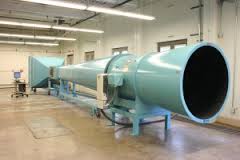 Although the PSC is often used to control fairly standard servo systems such as positioning a machine tool axis by reference to an encoder, or controlling force according to a load cell, it can be used to solve much more unusual and complex control problems. The wind tunnel installed at Queen Mary & Westfield College department of aeronautical engineering is used for teaching the basic principles of fluid dynamics and for experimental research by post-graduate students.

A large pressure vessel behind the department is filled with compressed air, which can be let into the wind tunnel through a control valve. The wind tunnel is a “one-shot” tunnel, meaning that the air passes through the tunnel and is then exhausted to atmosphere. When operating at the highest velocities the air supply is all used up after about 20 seconds. Re-charging the storage tanks can take up to 45 minutes with the 100-hp compressor.

Traditionally the control valve was operated manually, with the operator making adjustments to try and maintain a steady airflow of the required velocity as displayed on dial gauges in front of him. For most efficient use of the stored air it is necessary to open the control valve rapidly to achieve the desired air velocity in the working section of the tunnel, but it is difficult to achieve this manually without over-shooting the optimum setting and wasting air. Furthermore, as the pressure in the storage tanks starts to decrease it is necessary to open the valve further to maintain the same airflow.

Cambridge Dynamics converted the existing control valve so that it could be operated by a servo-motor. Pressure transducers mounted in the wind tunnel allow the airflow to be controlled as a function of the pressures within the wind tunnel. The demanded position of the servo-motor is continuously modified according to the demanded pressure or pressure ratio and the pressure of the air remaining in the storage tanks. The result is an initial rapid opening of the valve to exactly the right degree, followed by a gradual but accelerating increased opening as the air supply becomes exhausted.

The advantages of the new control system were immediately obvious. The required control parameters are entered on a computer screen, and a single press of a button is all that is needed to perform a run. The rapid and precise control of the inlet valve gives longer running times at the requested air velocity. Furthermore, the new system is safer than the old because the control system prevents dangerous velocities from being reached that might damage the fabric of the tunnel itself or of the model under test.